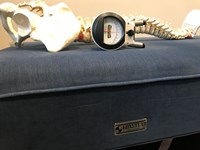 Why Choose Us For Your Gonstead Chiropractic Experience?

We are an exclusive Gonstead Chiropractic Clinic

To ensure you receive the complete Gonstead Chiropractic experience, be sure to consult a dedicated Gonstead Doctor, practising the method exclusively. The technical difficulty & discipline required within the Gonstead System, demands lifetime dedication & commitment to mastering its craft.

Our practitioners belong to the association in Australia that defines, upholds & teaches Gonstead Chiropractic in its original and pure form.

Our doctors are highly skilled in their application of the Gonstead Method and have a combined experience of over 30 years.  Dr. Matthew Panetta is a GCS. Australia Diplomate, teaching Gonstead analysis and adjusting technique to doctors and students at seminars and workshops in Australia.

Only authentic Gonstead equipment is used in our practice.

Our objective is to deliver optimal Gonstead Chiropractic care to achieve for you the best result in the shortest possible time. Our goal in our busy practice is to help more people to better health through accurate analysis & precision adjustment. In the words of Clarence Gonstead "find it, fix it, & leave it alone".

Centrally based in Glen Waverley, Melbourne

Please see the map below, we are extremely accessible and very close to the Monash Freeway in Melbourne.

Chiropractic began with Daniel D. Palmer giving his first adjustment in September 1895 in Davenport, Iowa. Today, there are many methods used by Chiropractors to correct spinal misalignments, joint dysfunctions and subluxation complexes. Many techniques are identified by the name of the person who developed them. One of the most advanced and scientific methods is a technique system known as The Gonstead System, named after Clarence Selmer Gonstead.

Dr. Gonstead developed the procedures from his extensive clinical research in Mount Horeb, Wisconsin. These procedures were developed over many years of clinical observation and research to work out how to get sick patients well. Dr. Gonstead practiced continually for fifty-five years and performed over four million Chiropractic adjustments, resulting in the most complete method of biomechanical analysis for use by today's Chiropractic Doctor's.